Customized Employment as an Evidence-based Practice to Improve the Employment Outcomes of Transition-age Youth with Physical Disabilities: Case Study 4 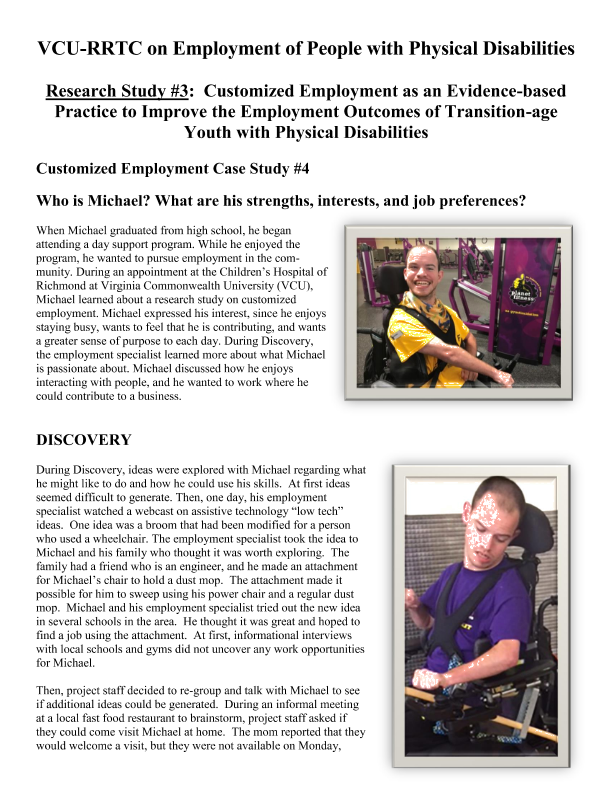 Who is Michael? What are his strengths, interests, and job preferences?

When Michael graduated from high school, he began attending a day support program. While he enjoyed the program, he wanted to pursue employment in the community. During an appointment at the Children’s Hospital of Richmond at Virginia Commonwealth University (VCU), Michael learned about a research study on customized employment. Michael expressed his interest, since he enjoys staying busy, wants to feel that he is contributing, and wants a greater sense of purpose to each day. During Discovery, the employment specialist learned more about what Michael is passionate about. Michael discussed how he enjoys interacting with people, and he wanted to work where he could contribute to a business.

DISCOVERY
During Discovery, ideas were explored with Michael regarding what he might like to do and how he could use his skills.  At first ideas seemed difficult to generate. Then, one day, his employment specialist watched a webcast on assistive technology “low tech” ideas.  One idea was a broom that had been modified for a person who used a wheelchair. The employment specialist took the idea to Michael and his family who thought it was worth exploring.  The family had a friend who is an engineer, and he made an attachment for Michael’s chair to hold a dust mop.  The attachment made it possible for him to sweep using his power chair and a regular dust mop.  Michael and his employment specialist tried out the new idea in several schools in the area.  He thought it was great and hoped to find a job using the attachment.  At first, informational interviews with local schools and gyms did not uncover any work opportunities for Michael.

Then, project staff decided to re-group and talk with Michael to see if additional ideas could be generated.  During an informal meeting at a local fast food restaurant to brainstorm, project staff asked if they could come visit Michael at home.  The mom reported that they would welcome a visit, but they were not available on Monday, Tuesday, and Friday evenings.  When asked why, she reported that the family went to “work out” those evenings. Michael also went even though he did not work out.  He typically talked to gym members and  greeted them as they arrived.  Michael reported that he really liked going to the gym and talking with people.  Staff already knew from previous Discovery activities that Michael loves to socialize but did not know that he attended a gym regularly.  This information may never have come up without informal conversations that are an important part of Discovery activities.

MICHAEL’S JOB
Armed with the name of the gym that Michael was going to with his family, the employment specialist began to negotiate with the gym manager for him to work there with his mop attachment. Unfortunately, the manager determined that he did not have money in his payroll to hire Michael. The employment specialist then went to a nearby Planet Fitness to find out more about their business and potential needs. The general manager for Planet Fitness expressed his interest and desire to hire Michael stating that he had hours available and would benefit from Michael cleaning the floors and interacting with members. The general manager discussed how Planet Fitness embraces accepting others, with their moto, “judgment free zone”. The employment specialist proposed that Michael’s welcoming attitude would promote the image of a judgment free environment.  Michael was hired as a Planet Fitness Associate and his main task is to maintain the cleanliness of the gym floor. Michael sweeps continuously for two, three hour shifts each week. He also interacts with gym members as he cleans providing a pleasant and welcoming gym environment.

ASSISSTIVE TECHNOLOGY
While the dust mop attachment was effective in picking up floor debris, it did not allow him to work independently, since the mop head had to be changed half way through his shift. Michael also experienced some difficulty with the mop head being pulled behind him.  He occasionally hit equipment or obstacles while turning due to the attachment extending behind him. When he turned to look at the mop, it created physical discomfort.  Fortunately, Michael was a client of Vocational Rehabilitation, and his counselor arranged for him to have a rehabilitation engineer visit his job site and evaluate what he could do to assist.

The DARS rehabilitation engineer was able to modify a floor sweeper that attached to the front of Michael’s power chair, allowing him to see where he was sweeping and avoid obstacles more easily. The sweeper collects floor debris more effectively than the dust mop and has a large collection bin. With natural support from his manager and coworkers, he only needs support in attaching and detaching the sweeper at the beginning and end of his shift, as well as emptying the collection bin every two weeks.

Michael also needed water breaks, however due to his limited hand dexterity, the employment specialist would need to hold a water bottle with a straw for Michael to drink.  The employment specialist was able to attach a sports water bladder to the back of Michael’s wheelchair that had an extending hose that attached to Michael’s chest harness. It was ordered online and is used by many athletes, which fit right in with the Planet Fitness clientele.  This eliminated the need for another individual to hold a drink for him whenever he became thirsty. With these solutions in place, Michael has been working independently for over a year and enjoys his position with Planet Fitness. He has received two raises, is a valuable member of the work team, and is a familiar friendly face for many gym members who come in. He has been recognized for his hard work by several local news agencies, as well as the CEO of Planet Fitness! With customized employment, Michael was able to find fulfilling employment that matched his interests and skills.

RESOURCES
Job Site Accommodations with Patricia Burns and Thomas Rybak from the Virginia Department on Aging and Rehabilitative Services: [https://pd.vcurrtc.org/training/webcastDetails.cfm/390]

ACKNOWLEDGEMENT
We would like to thank the management and staff of Planet Fitness for their continued support and assistance.  VCU-RRTC also would like to recognize Tom Rybak and the Department of Aging and Rehabilitative Services for the design and modification of Michael’s sweeper. Michael has been employed since March of 2017 and is a valued and satisfied employee.  The authors of this case study are Tomoya Lamberson, Dr. Katherine Inge, and Andy Muth at Virginia Commonwealth University’s Rehabilitation Research and Training Center on Employment of People with Physical Disabilities.  If you have questions on this case study and on the VCU-RRTC, you may contact Dr. Inge, Project Director at [kinge@vcu.edu] or (804) 828-5956. For more information on the VCU-RRTC, please visit [https://pd.vcurrtc.org].

VCU-RRTC is an equal opportunity/affirmative action institution providing access to education and employment without regard to age, race, color, national origin, gender, religion, sexual orientation, veteran's status, political affiliation, or disability. The VCU-RRTC is funded by the National Institute on Disability, Independent Living, and Rehabilitation Research (NIDILRR grant number #90RT503502). NIDILRR is a Center within the Administration for Community Living (ACL), Department of Health and Human Services (HHS). However, these contents do not necessarily represent the policy of NIDILRR, and you should not assume endorsement by the Federal Government.