Why It Pays to Hire Workers with Developmental Disabilities 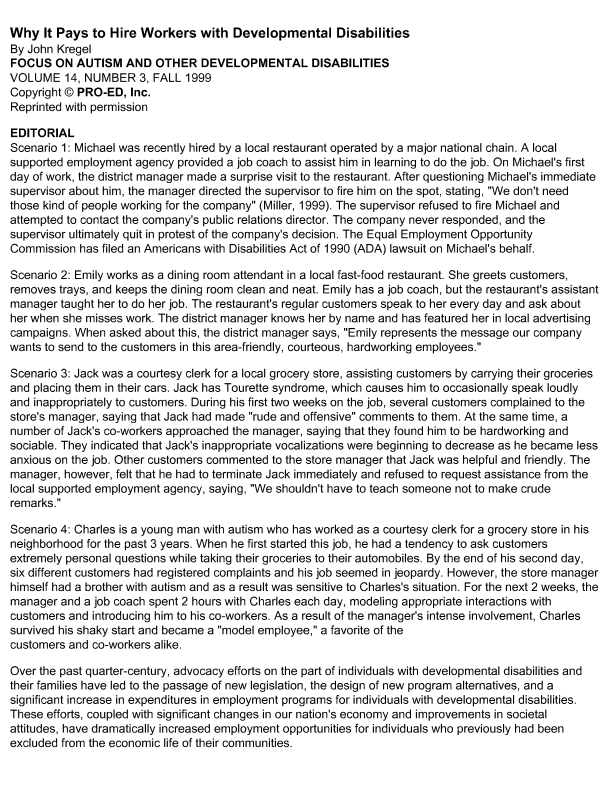 EDITORIAL Scenario 1: Michael was recently hired by a local restaurant operated by a major national chain. A local supported employment agency provided a job coach to assist him in learning to do the job. On Michael's first day of work, the district manager made a surprise visit to the restaurant. After questioning Michael's immediate supervisor about him, the manager directed the supervisor to fire him on the spot, stating, "We don't need those kind of people working for the company" (Miller, 1999). The supervisor refused to fire Michael and attempted to contact the company's public relations director. The company never responded, and the supervisor ultimately quit in protest of the company's decision. The Equal Employment Opportunity Commission has filed an Americans with Disabilities Act of 1990 (ADA) lawsuit on Michael's behalf.

Scenario 2: Emily works as a dining room attendant in a local fast-food restaurant. She greets customers, removes trays, and keeps the dining room clean and neat. Emily has a job coach, but the restaurant's assistant manager taught her to do her job. The restaurant's regular customers speak to her every day and ask about her when she misses work. The district manager knows her by name and has featured her in local advertising campaigns. When asked about this, the district manager says, "Emily represents the message our company wants to send to the customers in this area-friendly, courteous, hardworking employees."

Scenario 3: Jack was a courtesy clerk for a local grocery store, assisting customers by carrying their groceries and placing them in their cars. Jack has Tourette syndrome, which causes him to occasionally speak loudly and inappropriately to customers. During his first two weeks on the job, several customers complained to the store's manager, saying that Jack had made "rude and offensive" comments to them. At the same time, a number of Jack's co-workers approached the manager, saying that they found him to be hardworking and sociable. They indicated that Jack's inappropriate vocalizations were beginning to decrease as he became less anxious on the job. Other customers commented to the store manager that Jack was helpful and friendly. The manager, however, felt that he had to terminate Jack immediately and refused to request assistance from the local supported employment agency, saying, "We shouldn't have to teach someone not to make crude remarks."

Scenario 4: Charles is a young man with autism who has worked as a courtesy clerk for a grocery store in his neighborhood for the past 3 years. When he first started this job, he had a tendency to ask customers extremely personal questions while taking their groceries to their automobiles. By the end of his second day, six different customers had registered complaints and his job seemed in jeopardy. However, the store manager himself had a brother with autism and as a result was sensitive to Charles's situation. For the next 2 weeks, the manager and a job coach spent 2 hours with Charles each day, modeling appropriate interactions with customers and introducing him to his co-workers. As a result of the manager's intense involvement, Charles survived his shaky start and became a "model employee," a favorite of the customers and co-workers alike.

Unfortunately, far too many individuals continue to face seemingly insurmountable obstacles when attempting to pursue their dream of a rewarding, self-chosen career. Stereotypic employer attitudes and outright employment discrimination, such as that faced by Michael in the scenario above, still deny many individuals with developmental disabilities the chance to show their skills and abilities. Equally unfortunate are those situations in which an employer is willing to provide an employment opportunity to an individual, but lacks the confidence or awareness of the support resources that will enable that opportunity to be successful. The cases of Jack and Charles, described above, illustrate the differences between employers who feel confident in their ability to manage and train employees with disabilities and those who do not.

The ADA, passed by Congress and signed into law in 1990, was designed to prohibit discrimination by private employers. The ADA has been slow to meet its goal. An "anti-ADA backlash," unanticipated in its scope or intensity, coupled with a series of narrow court interpretations, have combined to limit the effectiveness of the law. Particularly troubling has been the inability of individuals with developmental disabilities to benefit from the employment discrimination provisions of the law. For example, less than 1% of the charges received by the Equal Employment Opportunity Commission (EEOC) involved individuals with autism or mental retardation.

Of course, this does not mean that all individuals with disabilities are highly rated on every aspect of their work performance. For example, in the studies cited above, supervisors invariably rated the speed, quality of work, and independence of workers with disabilities as low, while simultaneously rating their overall work performance as quite high. In other words, employers frequently say that an employee with a disability may not work as fast as his or her co-workers. The employee may make more errors than other workers or require more of the supervisor's time in supervision and guidance, Yet, when asked about the worker's performance in its entirety, employers consistently report that individuals with developmental disabilities contribute as much or more to the business as all other employees.

On one level, this finding seems contradictory. Speed, accuracy, and ability to work independently are among the factors most frequently associated with highly productive employees. Yet, it is becoming increasingly apparent that employers often consider factors other than speed of work and training time when determining an employee's overall level of work performance. Shafer and his colleagues (1988) found that these factors included reliability, inclusion in the workplace "culture," and willingness to respond to employer supervision and feedback.

Workers with developmental disabilities, including persons with significant support needs, are dependable and reliable workers. In several major studies (Kregel, Parent, & West, 1994; Kregel & Unger, 1993; Shafer et al., 1987; Shafer et al., 1988) over 900 supervisors and employers were asked to rate the work performance of persons with disabilities in comparison to workers in similar jobs who did not have any identified disabilities. Workers with disabilities were rated higher than their non-disabled counterparts on a number of factors, including attendance, arriving to work and returning from breaks on time, accepting authority, and being accepted by the public.

Workers with developmental disabilities are generally satisfied employees who enjoy their jobs and the opportunity to contribute to their company. Individuals with developmental disabilities have overwhelmingly reported that they enjoy their jobs and their chance to work together with their co-workers and employers (Parent, Kregel, & Johnson, 1996; Test, Hinson, Solow, & Keul, 1993). When asked to identify the aspect of their job they enjoyed the most, workers with disabilities most frequently reported that they enjoyed their job duties and the people with whom they worked. They overwhelmingly indicated that their relationships with supervisors and coworkers were rewarding and that they were treated no differently from any of their co-workers.

While they are generally satisfied, individuals, with disabilities, like virtually all members of the workforce, often would like to see changes in their current job. Over half of the individuals interviewed by Parent and her colleagues (1996) reported that they wanted to obtain a better job in the near future. A chance for increased earnings, changes in their work schedules or job duties, or opportunities for promotions and career advancement are among the concerns expressed by consumers.

Workers with developmental disabilities have a positive impact on the overall productivity and profitability of the business or company that employs them. Many employers continue their commitment to workforce diversity as a strategy for increasing the productivity and competitiveness of their company. Workers with developmental disabilities are hardly a burden to business or industry. On the contrary, the presence of workers with disabilities actually increases the ability of a company to contend with its competitors. Kregel and Tomiyasu (1994) found that employers view people with disabilities as having a positive effect on their entire workforce. For example, many times co-workers will become vested in the success of the individual with a developmental disability. This will lead not only to social integration of the individual, but also to camaraderie and cooperation among coworkers.

The "bottom line" from all these studies is this. Many individuals with developmental disabilities make highly effective employees. The characteristics valued most by employers - reliability, dependability, getting along with co-workers, loyalty to the company, respect for authority-are the factors used most often by employers to describe workers with developmental disabilities. Those factors that truly "handicap" an individual in terms of his or her value to an employer-insubordination, willingness to work as a member of a team, lack of dependability, substance abuse problems are the characteristics that employers least frequently ascribe to workers with disabilities.

In today's highly competitive business environment, more and more employers are beginning to understand the value of workforce diversity and the potential contribution of individuals, with developmental disabilities. Hiring workers with disabilities is not a charitable act, it's just good business sense. The vast majority of individuals with developmental disabilities arc terrific employees who are doing jobs that need to be done and who are contributing to the overall profitability of their companies in a variety of ways. Those employers who fad to recognize the potential contribution of workers with disabilities must understand that their competitors will and are taking advantage of this competitive edge. Companies that continue to discriminate against individuals with disabilities will go the way of those that failed to take advantage of the skills and abilities of women, people of color and other minorities. Why should businesses hire workers with developmental disabilities? Simply because they can't afford not to.

AUTHOR'S NOTE The development of this manuscript was partially supported by Grant No. H133B980036 from the National Institute of Disability and Rehabilitation Research (NIDRR) and Contract No. 0600-98-35487from the Social Security Administration (SSA). The opinions expressed are solely those of the author and no official endorsement by NIDDR or SSA should be inferred.