Barriers and facilitators to employment as reported by people with physical disabilities: An across disability type analysis 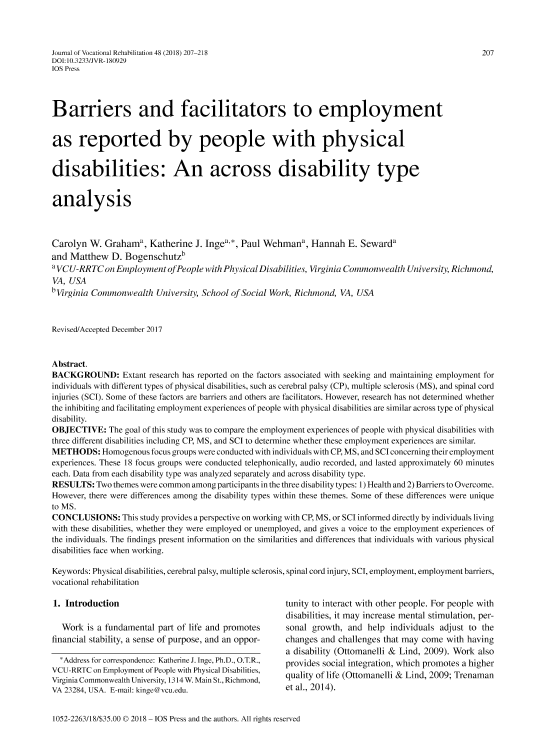 This study provides a perspective on working with CP, MS, or SCI informed directly by individuals living with these disabilities, whether they were employed or unemployed, and gives a voice to the employment experiences of the individuals. The findings present information on the similarities and differences that individuals with various physical disabilities face when working.

Work is a fundamental part of life and promotes financial stability, a sense of purpose, and an opportunity to interact with other people. For people with disabilities, it may increase mental stimulation, personal growth, and help individuals adjust to the changes and challenges that may come with having a disability (Ottomanelli & Lind, 2009). Work also provides social integration, which promotes a higher quality of life (Ottomanelli & Lind, 2009; Trenaman et al., 2014).

Annually, each VR Agency funded by the Rehabilitation Act of 1973, as amended, submits to the Federal Rehabilitation Services Administration (RSA) the RSA 911 Closure Report (Achterberg et al., 2009). Data was analyzed from this report for FYs 2011, 2012, and 2013 on individuals with the primary disability of CP, MS, or SCI who exited the exited VR system. To be included in the analysis, individuals had to be between the ages of 24–64; signed an Individual Plan for Employment (IPE); and received VR services. For all three years, approximately one third of these individuals with CP, MS, or SCI exited the VR system with an employment outcome consistent with their IPE. Conversely, the other two thirds exited the VR system without an employment outcome after receiving VR services (Inge, Cimera, Revell, Ward, & Seward, 2015; Inge, Cimera, Revell, Wehman, & Seward, 2015; Inge, Rumrill, Cimera, & Revell, 2016). This data does not reveal why individuals with these disabilities are not achieving their employment outcomes consistent with their IPEs. However, a review of the literature provides some information on the barriers that these individuals with physical disabilities may encounter when attempting to achieve competitive employment outcomes.

Employment rates for people with CP tend to be significantly lower than for people with other disabilities (Flippo & Gardner, 2011). They also continue to experience significantly lower rates in getting and keeping employment in comparison to individuals without disabilities (Huang et al., 2013; Magill-Evans, Galambos, Darrah, & Nickerson, 2008; Rutkowski & Riehle, 2009). Because CP may be associated with significant physical challenges, individuals with CP often need accommodations or personal care assistance in order to perform simple tasks (utkowski & Riehle, 2009). Another challenge is navigating employment without losing disability benefits. In a Minnesota study, Murphy and colleagues (2000) found that 53% of adults with CP were competitively employed, but 22% of those individuals risked losing disability benefits if they advanced in their careers. Disability benefits may be needed to pay for assistive technology and/or on-going personal care assistance.

People with MS face unique barriers to employment, since MS is associated with a wide range of physical, cognitive, and emotional symptoms that appear episodically and unpredictably (Raggi et al., 2016; Roessler & Rumrill, 2003; Rumrill et al., 2013). These symptoms have been reported by individuals with MS as the largest barrier to employment, particularly the relapsing and progressive characteristics of the illness (Roessler & Rumrill, 2003). Those who experience symptoms from MS most or all of the time, especially if those symptoms are more severe, are more likely to be unemployed (Raggi et al., 2016; Roessler, Rumrill, & Fitzgerald, 2004; Rumrill et al., 2013). The fatigue and weakness associated with MS affect employment skills and capacities. Workplace factors such as poor support towards accommodations, inflexible employment structures, and lack of employers /colleagues’ support have been found to present major barriers for individuals with MS (Sweetland et al., 2012).

Physical or structural barriers are the highest perceived barriers among people with SCI when it comes to employment and social participation (Tsai et al., 2017). A study by Cotner and colleagues (2017) found that barriers for veterans with SCI could be broken down into six categories. This included veteran-specific (personal characteristics, lack of transportation, fear of losing benefits), high caseload of employment specialists, lack of integrating the employment specialist into the SCI clinical team, employment specialist hiring and turnover issues, SCI clinical team unfamiliar with vocational rehabilitation, and difficulty obtaining resources (Cotner, Ottomanelli, O’Connor, & Trainor, 2017). However, having a good clinical team and employment specialists that specializes in SCI were major facilitators in employing individuals with SCI. Individuals with SCI who receive specialized VR services that include job development or placement, employment supports, and workplace follow-ups fare much better in employment outcomes (Ottomanelli et al., 2015.)

Research Question 1: What are the most commonly reported barriers and facilitators to employment identified by people with CP, MS, and SCI?

Research Question 2: What are the similarities and differences in employment experiences among the people with the three different types of physical disabilities?

Research Question 3: What employment experiences are unique to a specific physical disability?

A targeted recruitment approach was used for this study to identify participants. Five national organizations representing people with disabilities assisted in the recruitment including the World Institute on Disability (WID), National Multiple Sclerosis Society, United Spinal Cord Injury Association, United Cerebral Palsy (UCP), and the National Council for Independent Living (NCIL). A standardized email was disseminated by these organizations explaining the purpose of the study. Participants also were recruited through their organizational websites and other internet methods such as social media. The recruitment materials specified that potential participants must have a physical disability (e.g., CP, MS, SCI, or other physical disability) and reside in the United States. In addition, participants had to be (a) in the age range of 18–65; (b) employed or unemployed; and (c) willing to participate in an hour-long telephone focus group. These electronic notices contained a link to an online database that provided specific information on the study, the study questions, and a place for the potential participant to consent or decline participation.

After potential participants read the study information online, they clicked on an electronic button to decline or consent to participate. Individuals that declined to participate were re-directed to a screen where they were thanked for their time. Individuals that consented to participate were re-directed to a screen where they selected their physical disability and their employment status: employed or unemployed. In addition, they entered their e-mail address, telephone number, and mailing address for contact purposes during the study and for mailing a gift card at the completion of the focus groups. This personal information was stored in a database housed on a password-protected server that required a unique username and password to access. Only the lead researchers had access to this information. Data collected during the focus groups was stored in separate files and not linked to participant information, which further protected the participants’ confidentiality.

All study procedures used in this study were approved by the university Institutional Review Board (IRB) at the authors’ university. The importance of confidentiality was emphasized in the online consent information. In addition, the facilitator discussed confidentiality with the participants at the beginning of each telephone call and asked that they not share their name or other identifying information. Using a telephonic method of conducting focus groups allows people from across the country to be included in the study. The use of telephones also allows participants to feel more comfortable and open about sharing thoughts and feelings since there is a sense of anonymity (McCoyd & Kerson, 2006; Novick, 2008; Sturges & Hanrahan, 2004).

The lead researcher or a research associate facilitated the focus groups using a toll-free telephone conference system. Permission to audio record a focus group was obtained at the beginning of each call by the facilitator. In obtaining permission, the facilitator told the group that the audio recording would be transcribed and all names or personal identifiers would be deleted from the transcripts. Participants also were told that they could skip any question that made them uncomfortable or that they did not want to answer. Finally, the facilitator told participants that their involvement in the study was appreciated.

The facilitator then began the recording and proceeded through each of the core questions, as well as related follow-up probes as needed. To ensure that all participants were able to respond to the question, the facilitator asked participants whether they had any more information to add once a conversation ended. Most of the focus groups ran for approximately one hour with a few calls extended to 90 minutes upon request of the participants. Identifying data such as names, addresses, and employers were removed from the transcripts during the transcription process so that only de-identified data were used in the analysis. All participants were compensated in the form of a $50 gift card that could be used at a retailer of their choice after a focus group was conducted.

Audio recordings of the telephone focus groups were transcribed verbatim by a professional transcription service. The transcri